Lookmarks, analog to bookmarks or landmarks, save the position and angle of your camera. After setting a lookmark with the Spyglass, you will be able to go back to that exact same view angle you had when you saved the lookmark.

To inspire you for what lookmarks can be used, I have compiled an non-comprehensive list of scenarios.

Saveing a lookmark is really simple.

There are a number of ways to focus a previously saved lookmark:

To go back to the normal camera mode, click the "Release" button

on the Spyglass HUD, which will release the Spyglass's camera control. You can also click the "Reset" button

, which, additionally to releasing the camera, stops the Spyglass's automatic camera control.

Next to the name of a particular lookmark you will see four action buttons: 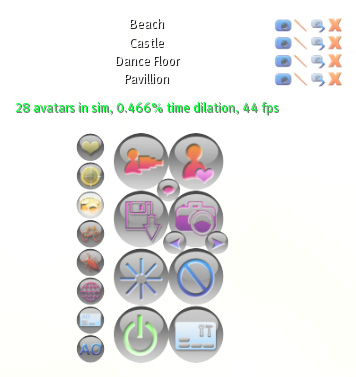 Note that whenever you focus a lookmark you will find an SLURL to the position of the camera in local chat. You could easily teleport to that location by clicking the SLURL in the chat history window.

button, then choosing "Lookmarks" gives you a menu of options for managing lookmarks.

Lookmarks are saved per region. When you teleport to another region you will get a different set of lookmarks. While you can zoom in from a region to a neighboring one, you can set a lookmark that displays a view that isn't actually in the region you are currently in. However, the lookmark you saved in this fashion will only be accessible in the region you saved it.

The number of lookmarks you can set per region is limited by about 50 lookmarks (you might be able to save more). There is no known upper limit for the number of regions in which you can save lookmarks. (Since script memory is limited, there is a limit, but this limit is of rather theoretical nature.)